So here I am with nervous energy, standing before 16 eyeballs. Today marks the first day of being in the lab with my students. I’ve met these eager individuals once before but somehow being on campus feels surreal. The last time I was on campus with students was March and so much has changed in this world since then. The new rules are easy to follow, but it’s hard to remember them all. As I stand there before the students, searching for the right things to say, I notice all those eyeballs looking to me for guidance and reassurance and yet at that moment my thoughts wandered to “how will I remember all their names if I can’t see their faces”.

The last 5 months has had us building activities, learning Bongo, and prepping lesson plans but what I wasn’t prepared for was how the instructor and student relationship might be challenged. The masks we don for protection may be a barrier for more than we anticipated. How will I see the quiver of the lip after I give tough feedback? Will I know my student is frowning with anxiety before a procedure? Will those eyes give me enough details that I’ll know to ask more questions? I fear that there is potential for this mask to become a greater entity than its intended purpose and take on a life of its own creating a relationship barrier that none of us could have expected.

I was prepared and understood that things would be different this term but as I reflect on my own goals of building meaningful student instructor relationships, I pause. For me, those meaningful relationships might include a smile and nod across a room for a job well done, it’s a soft glance when a student is struggling, and it’s a neutral expression when delivering tough news. Will I be the educator I strive to be and will my mask still allow me to build those safe places that students feel they can let their guard down. Now more than ever I’ll need to use my words, words that may not always come easily. I’ll need to verbally communicate my feelings but will that have the same impact.

These musings have left me pondering many things and as I ask myself these questions I realize there is still an opportunity to fulfill my goals of building meaningful relationships. In fact, this goal may be more important than ever. The students of today, although brave and resilient, will need those soft glances more than ever before. Those 16 eyeballs will continue to look to me for direction and despite a pandemic I will give them the best of me that I can, and in the meantime…blink twice if you are feeling overwhelmed.

What are your goals for the new school year?

It has become our morning routine to “trust” Indy to go outside by herself. This hasn’t always been the case. For much of her time with us, due to a number of events that lead us into a distrusting relationship, Indy has required supervised bathroom breaks. Events, that you’ll find documented in previous posts, such as a scaling the fence (twice), a roll in the deer poop (required 2 baths), and an escape out of the car that I was certain was going to be the end of her or me have given us great stories but have also left lasting effects of leeriness.

For a few weeks now, Indy has been a good girl. She goes out in the AM unsupervised, does her business, and returns when called. This is a big event in our lives and a welcomed relief!

Recently, while getting ready for work, I let Indy out to use the local facilities. It was approximately 0530, dark, and the rest of the occupants of the property were all sound asleep. After a few minutes, I poked my head out the door and whistled for her, nothing…

After a few more minutes, I called and whistled for her again…nothing!

So back inside I go to put some shoes and a coat on, just in case I needed to go for a trek to find the doggo. I stepped outside, and as I reached the corner of the trailer, I witnessed  the chase of a lifetime. There are many different animals that live on this property from deer to mice and many other creatures in between and I’m certain Indy would chase them all! 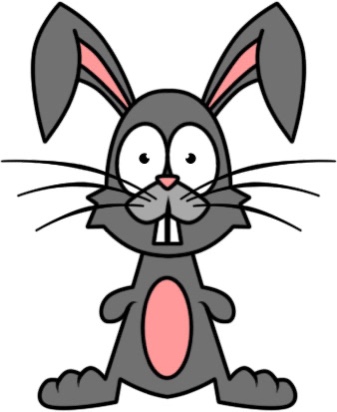 So, in the dark of the morning, when the streak of a light haired critter followed by a dark haired rocket bolted by me across the driveway and into the black of the trees, I shouldn’t have been surprised. But, initially I was startled by the raucous and was totally caught off guard by what was happening until I heard the scream of the animal, then I quickly realized that Indy was on the hunt.

While trying to not wake up the neighborhood, I called for Indy, she came when called but she carried in her mouth the dead rabbit that I’m sure she would have eaten if I let her! After convincing her to drop it, we went back inside to contemplate the morning events, make a plan for disposing of the evidence, and figuring out a way that I could stop hearing the scream of the rabbit…

It’s pretty clear that you can take the doggo out of the wilderness but a true animal will live within her heart.

Do your domestic animals have a favorite creature to chase? I’d love to read your story, be sure to post in the comments!

A little help from some Friends!

Thank you for keeping the dream alive! Every dollar counts and goes directly into the production of all our content! Thank you!

Or enter a custom amount

Your contribution is appreciated.